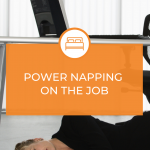 Power Napping on the Job:
It May Help Your Company Save Money

Research suggests that taking a nap at work actually improves performance, so, why does the sleep-work relationship have such a negative stigma?

As a 16-year-old, I often worked a 12-hour Saturday shift at the local grocery store. This included the typical duties for a teenager’s first job, taking out the trash and unclogging toilets. Good times.

One afternoon, I finished my duties with several hours to spare. I was exhausted, so I headed to my car to take a power snooze. No one would ever know.

About ten minutes into my slumber, I jolted awake to someone rapping on my window. It was my manager. I had made the mistake of parking right next to her.

Inside the store, I was publicly scolded. “Sleeping at work is not acceptable,” she announced. “Anyone caught doing so will be let go.”

This is every employee’s greatest fear, getting the sack because you were power napping on the job.

Fast forward 10 years. Here I am researching for this article but before writing it, I make a point to rest for a half hour. In fact, I do this for thirty minutes at work almost every day, and I don’t even have to hide it from my managers.

So, why am I not only allowed but encouraged by my bosses to do this? (Helps that we run a sleep website!) It’s also because research shows that this practice actually makes for more productive employees.

What Is a Power Nap?

Sleeping at Work Is a Growing Trend

Benefits for the Employer

Benefits for the Napper

How To Optimize Office Naps

What Is a Power Nap?

A power nap lasts 20 to 30 minutes and takes the sleeper into phases 1 and 2 of the sleep cycle. This type of rest helps re-energize both the mind and body, helping workers feel ready to go when they wake up.

How Long to Nap
for Maximum Productivity?

Make sure to set an alarm. Napping for more than 25 to 40 minutes could have you going into slow wave sleep, or more commonly called “deep sleep”. This could leave you waking up even more tired than before.

The amount of time needed varies from person to person, and some people might need as much as 40 minutes. Do some testing at home to figure out what your ideal power rest time is, you will know when you got it because you wake up feeling renewed with energy.

“Voluntary napping, on the other hand, is not a sign of sleep deprivation, illness, or aging. In fact, a “power nap” can be helpful as well as enjoyable. Many studies of shift workers and other volunteers have reported that a nap as brief as 20 minutes can improve alertness, psychomotor performance, and mood.” [2] Harvard Medical School

Sleeping at Work Is a Growing Trend

Catching some Zzz’s on the job is becoming more acceptable every year, but the practice has not gained the traction that workers need and hope for.

A 2002 study showed that job performance improves after a 30-minute rest. A 2003 experiment displays nearly the same finding, while a 2010 publication indicates that power sleep improves cognitive function. 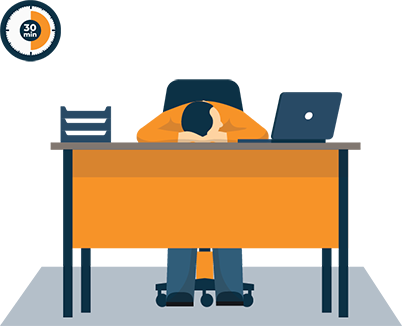 It’s now 2021, so why are there still so many companies that fail to see the benefit of this practice?

The principal reason is that they probably have no idea.

“Lots of research shows that a nap of about 20 minutes in the afternoon has a positive effect on attention vigilance mood and alertness” — Dr. Rita Aouad, M.D. [3]

Benefit for the Employer

Most business leaders do not realize that sleep deprivation in the workplace costs U.S. economy $411 billion a year. If you are an employer, this gives you something to consider, right?

It could be easy to shrug off these numbers and think, “this doesn’t affect my company.” Based on the statistic that 1 in 3 employed adults do not get enough sleep, chances are it does affect your business.

With sleep deprivation negatively influencing the global economy at nearly 3% GDP, and studies showing that instituting sleep-friendly policies can improve productivity by 34% and alertness by up to 100%, allowing employees to rest in the workplace stands to help companies make more money.

And if you think simply adding a coffee machine to the office is a fix, another study found that napping is a more powerful tool than caffeine to improve overall memory and cognitive function. Then again, you can always consider the popular coffee nap.

The RAND Corporation instructs employers to “recognize the importance of sleep and the employer’s role in its promotion.” Doing so could drastically change your workplace and directly influence profits.

“We already know people are sleeping on the job. Their performance and safety are going to suffer if they are sleepy. If we can get performance up by 34% by letting them nap, why not? There's no other motivator, nothing else that pumps up performance that much.” — Mark Rosekind, PH.D. [4]

Benefits for the Napper

When 1 o’clock rolls around and you feel like you might pass out at your desk, taking 20 to 30 minutes to sleep might just help you get through the day. Not only may this give you the energy you need, but a nap can help improve your overall work performance, which may help you stand out as an exceptional employee.

Apart from work, if the worker is not getting enough rest at home, supplementing missed sleep with a daytime snooze can be beneficial to their health. Here are just a few ways: 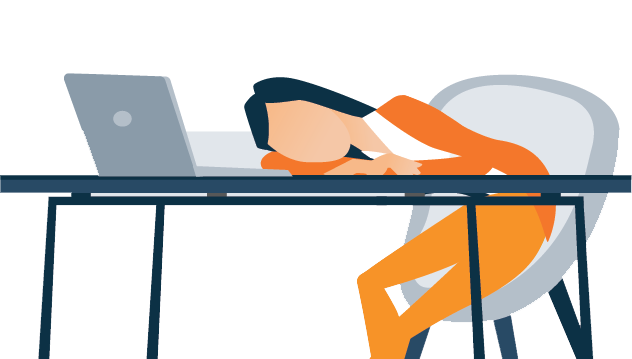 “If someone has the luxury to take a nap during the day, it may also have benefits for high blood pressure, “– Dr. Manolis Kallistratos, M.D. [5]

“A short nap at the office or in school is enough to significantly improve learning success. Whenever people are in a learning environment, we should think seriously about the positive effects of sleep.” — Alex Mecklinger, PH.D. [7]

“A certain percentage of people are regular nappers. If you ask these people, they'll be aware they're getting benefit: They're more alert, have better moods, and they're feeling sharper.” — Kimberly A. Cote, Ph.D. [8]

This all sounds great, right? You’re probably wondering, where could I work to get these perks.

While most employers do not currently offer the benefit of napping, there are actually quite a few large and small companies that provide the option for a “nap time”.

It’s already caught on throughout Asia and it’s picking up steam in the U.S. If you think I’m making this up, consider the list of American companies that encourage sleeping at work. Let’s start with one we all know. Heck, you probably used their service to find this article.

One of the leading tech companies of the age has energy pods that their employees can use to go to catch a mid-afternoon power nap.

This clothing line provides a nap center surrounded by a fish tank. Here employees can go to catch some much needed Zzz’s.

After the company’s founder Arianna Huffington collapsed from exhaustion, she saw this as a wake-up call and wrote a book titled The Sleep Revolution. Not surprisingly, their New York City office now has two napping rooms.

According to the National Sleep Foundation, one of their studies found that a 40-minute nap improves productivity by 34%, so it is no surprise that they also have sleep pods for their employees.

The car service is another brand that has a dedicated space for employee power naps.

Employees of the social media giant really “like” the nap pods at Facebook’s main office.

This brand was one of the frontrunners that allowed employees to nap on the job with a special room.

While not all companies have a dedicated room, many others allow employees to sleep at their desk, in their car, or really anywhere else they can find a place to rest their head.

“Findings argue for employer policies that actively encourage napping, especially in today's knowledge-based economy. Some companies have set up nap rooms, and Google has “nap pods” that block out light and sound.” — Robert Stickgold, PH.D. [9]

How to Optimize Office Naps

It’s possible that your boss does not permit napping, but most will allow you to have periodic breaks, and what you do during these breaks is up to you. (You still may want to run it past your boss, though. Show them this article!)

How can you maximize your daytime sleep in a work environment that doesn’t have a designated sleep space?

Find a Cool Shaded Area
Turn out the lights, close the blinds, and maybe lower the thermostat by a few degrees before drifting off.
Bring a Pillow from Home
If you are going to be napping on a regular basis, bring a small pillow from home and keep it in your desk drawer, this will at least make napping at work a little more comfortable.

Nap at or under the Desk

It may not be ideal, but either lean back in your chair, place your head on the desk or crawl underneath the desk to block out the light.

Sleep in the Break Room
This can sometimes be very noisy, but if you go at a less busy time of day it could be an ideal place to re-energize with a power sleep.

Nap in the Car
I know this didn’t work out for me, but it might for you. Sleeping in the car can be a good way to find some peace and quiet and it can be a good place to take a short nap. Make sure to crack the windows if it’s hot outside.

My final word to the employee. If you see how this could benefit your workplace, copy the link above and send it over to your boss in an email. After all, your only trying to help the company save some money, and you might just find that you are allowed to take that workday nap you’ve always dreamed about.

To all those employers out there. The research and evidence out there suggest that allowing your employees to get some rest benefits both parties. You not only become the awesome boss that allows power naps, but the only thing you have to lose by not trying is even more money.

Sources and References:
[1] 7 Big Time Benefits of Power Naps (And How to Do It), Yuri Elkaim
[2] Making the Most of a Short Nap, Harvard Medical School
[3] Clocking off: The Companies Introducing Nap Time to the Workplace, The Guardian
[4] America, It's Time for Your Nap, WebMD
[5] A Nap Is as Good as a Pill for Lowering Blood Pressure, Research Suggests, New York Post
[6] Napping May Help with Blood Pressure Management, Science Daily
[7] A Short Daytime Nap Could Improve Memory by Fivefold, Study Finds, Medical News Today
[8] The Science of Naps, American Psychology Association
[9] Napping May Not be Such a No-No, Harvard Health Publishing
Follow Us On