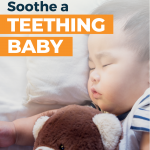 Disclaimer – Nothing on this website is intended to be a substitute for professional medical advice, diagnosis, or treatment… Read More Here.

Mild fever, pulling at the ears, and endless crying throughout the night – these are just some of the symptoms that often plague babies during the first few months of life. Is it teething? Is it an illness? Not only is it hard to tell the difference, but it can be extremely challenging for parents to know how to soothe baby and get everyone the rest they need.

Considering that babies go in and out of teething for approximately the first 2 years of life, I can speak from 6 years of experience in saying that teething is still a subject that brings on PTSD-like anxiety at just the mention of the word. Endless crying, sleepless nights, and a dreadful feeling of helplessness are the top memories that come to mind.

Thankfully, there were a few tried and true solutions that helped with all three of my children. Keep reading for the top tips and tricks on how to help your teething baby sleep at night.

When Does the First Tooth Appear?

Signs Your Tyke is Teething

Is Pain from New Teeth Worse at Night?

Importance of Sleep for Infants and Toddlers

The Top 10 Tips and Tricks for Soothing Sore Gums

Questions for the Pediatrician

When Does the First Tooth Appear?

There is a wide range of “normal” when it comes to baby’s first tooth. Some babies may start teething as young as 3 months of age, and others may still be sporting a toothless grin at their first birthday party. According to the American Academy of Pediatrics (AAP), the majority of infants will start to develop teeth during the first 6-12 months of life and have all of their baby teeth by age 3.

The lower front teeth (known as the lower central incisors) are usually the first to develop, followed by the top front teeth (upper central incisors). By the time this initial tooth eruption period has ended, children will have a full set of 20 teeth that will eventually be shed between the ages of 6-12. While children are technically “teething” again when their adult set comes in, they rarely exhibit the same dreadful symptoms seen during infancy (unless you count being grumpy all the time and a constant refusal to go to bed). 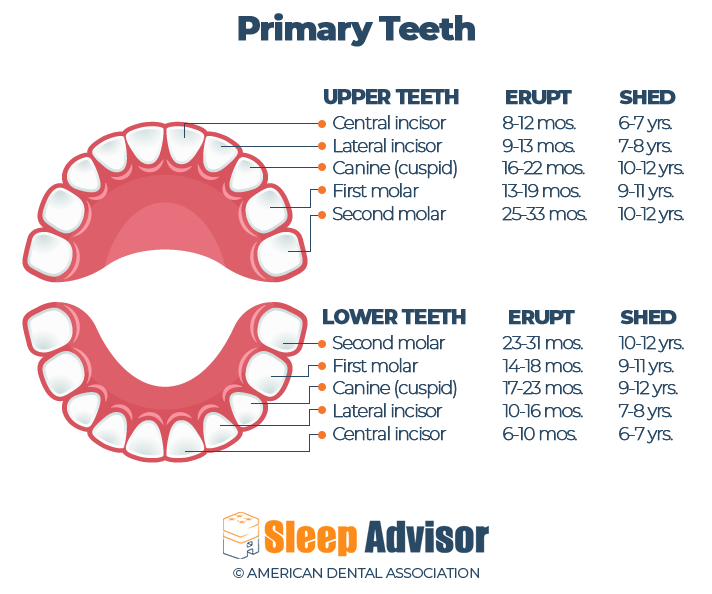 Signs Your Tyke is Teething

Little ones around 3 months of age typically start drooling, bringing their hands to their faces, and begin putting just about everything in their mouths. While many parents assume this means their child is teething, it could still be months until that first tooth erupts. Making matters more challenging, symptoms can vary based on the child, age, tooth, and daytime versus night.

Some of the most common signs and symptoms of teething include: 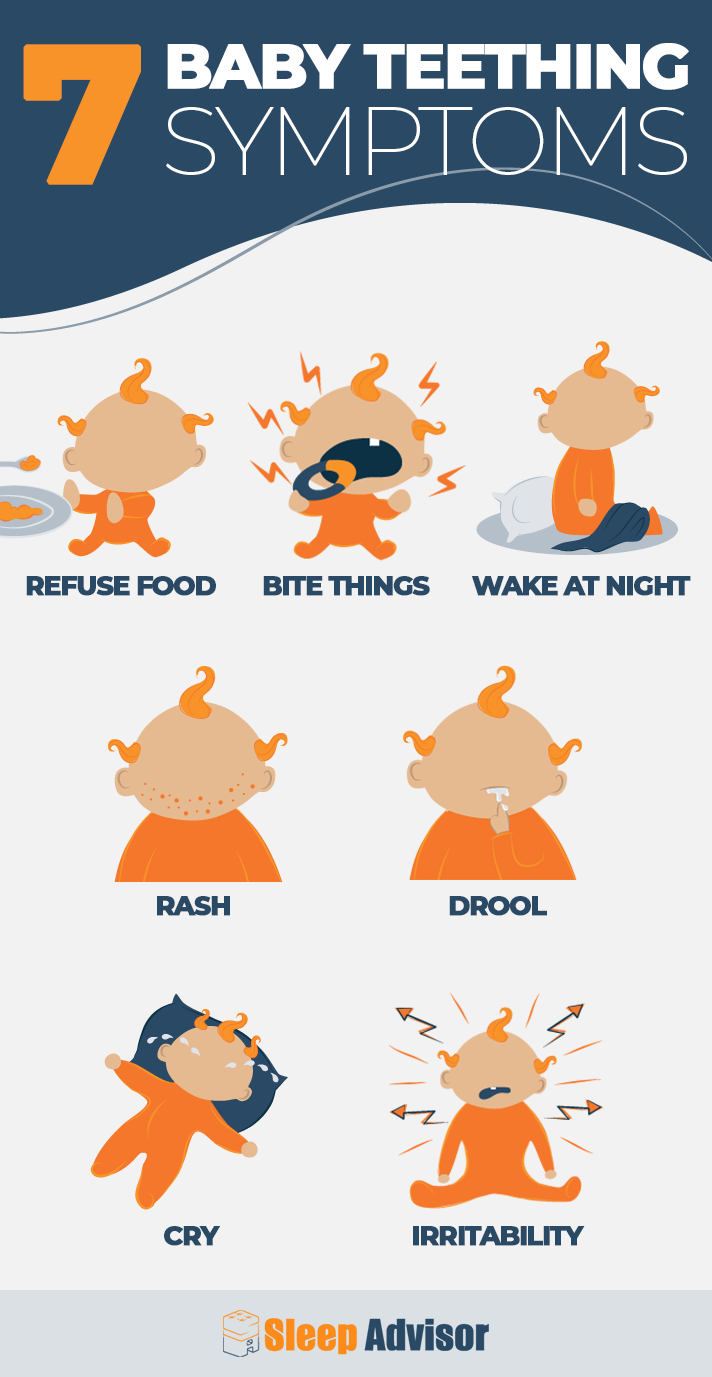 While many parents also report symptoms like a runny nose, loose stools, cough, vomiting, and fevers over 102°F, in a study of 125 children published in Pediatrics, none of these symptoms were significantly associated with tooth emergence.

At the same time, many of these complaints are very commonly noted by pediatricians and there may be a scientific explanation as to why. Research has identified an increase in cytokines, inflammation-promoting molecules from the immune system, in the gingival fluid of erupting teeth. This type of stress in the body could make infants more susceptible to illness, explaining symptoms like fevers and a runny nose.

When it comes to fevers and teething, studies have found mixed results. One systematic review and meta-analysis of multiple studies found that the associated between fever and primary tooth eruption was present only in studies where the temperature was taken rectally, the gold standard for accuracy in infants. The AAP has similarly concluded that a baby’s body temperature may rise slightly during this time but typically will not reach the level of a true fever unless they have an illness or infection.

Is Pain from New Teeth Worse at Night?

Some parents may find their baby seems fine during the day, only to face a long night of crying and a worsening of symptoms at night. Some pediatricians believe this is because children have fewer distractions at night, are exhausted, and have less ability to cope with their pain.

Another reason pain may seem worse at night has to do with the increased levels of two cytokines that were found in the study referenced above. IL-1beta and TNFalpha are cytokines that were found to correlate with fever and sleep disturbances in teething babies. Research has found that these signaling molecules have a direct impact on sleep, interacting with hormones and neurotransmitters that signal sleep-regulating neurons in the brain.

Not a good mix for a sleepy baby. 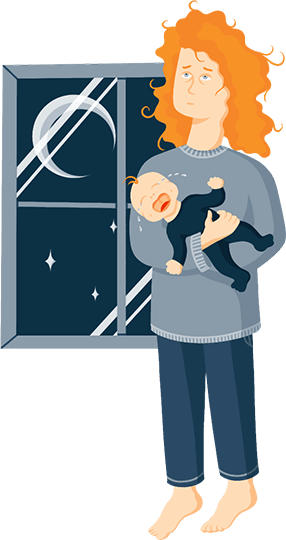 In a study evaluating the signs and symptoms of primary tooth eruption in 254 children between 8 and 36 months of age, 82.3% experienced sleep disturbances (and likely an equal number of parents did too). Regardless of age or circumstances, exhaustion can make pain feel worse and make coping with that pain much more challenging. During a period of life when sleep disturbances are all too common, it is easy to see how sleeplessness and pain becomes a vicious cycle when you throw teething in the mix.

Importance of Sleep for Infants and Toddlers 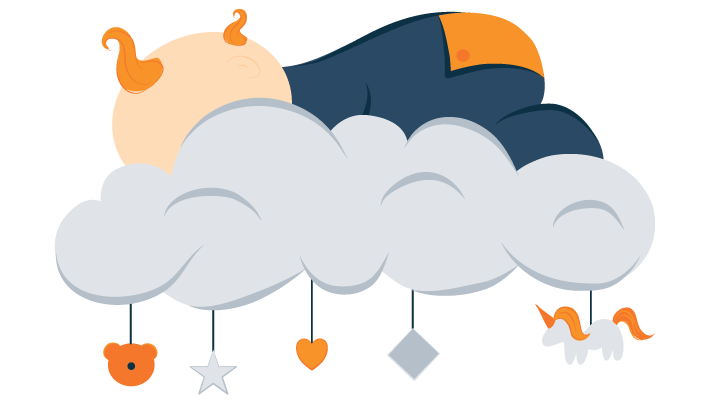 Scientists and pediatricians have been telling us for years how important sleep is for the physical and mental development of infants and toddlers. As a parent, I have often wondered why something so critical to growth and development would be so challenging and face so many obstacles during the early years.

Research on sleep and the developing brain is still in its infancy, but we do know that rest is fundamental for physical, emotional, and behavioral health at all ages, but especially during childhood.

Sleep regressions, illness, teething, and countless other obstacles can make getting your child the 12-14 hours of rest they need a daunting task. Pediatricians agree that the best way to help little ones get the rest they need is to maintain a regular schedule, have a predictable bedtime routine, and if all else fails…give it time.

Find Out More: Complete Parent's Guide to a Child's Sleep

The Top 10 Tips and Tricks for Soothing Sore Gums

If your little one is showing signs of discomfort, try these simple solutions to bring them some relief:

Rubbing the Gums with Your Finger

Using a clean finger or knuckle, gently massage the sore areas of your baby’s gums.

Rubber or plastic teething toys that your child can chew on may help by providing counter-pressure against the erupting tooth.

A damp washcloth that has been twisted and frozen may help to numb the area, reducing aches and inflammation.

Chilled Hard Foods to Gnaw On

Babies who are already eating solid food may find relief from gnawing on chilled fruit or veggies such as apples, cucumber, or carrots.

Excess saliva in the form of drool can be irritating to the face and neck, so keep your little one dry by frequently wiping the mouth, using drool bibs, and changing clothes as necessary.

If needed, an over-the-counter remedy such as acetaminophen or ibuprofen (for babies over 6 months of age) may help.

Several natural remedies such as essential oils and homeopathic teething tablets are available, but avoid those containing benzocaine, lidocaine, or belladonna as these can pose harm to children.

Sucking is a comforting act for babies and has been shown in research to help reduce pain. Breastfeeding, drinking from a bottle, or sucking on a pacifier are all great tools that should be offered frequently during this time.

Nothing reassures children more than being comforted by loved ones. Providing lots of hugs, cuddles, and kind words can go a long way in helping children cope with discomfort.

Carrying infants and toddlers in a sling, wrap, or structured carrier has been shown in studies to promote bonding and provide reassurance by keeping little ones close.

Questions for the Pediatrician 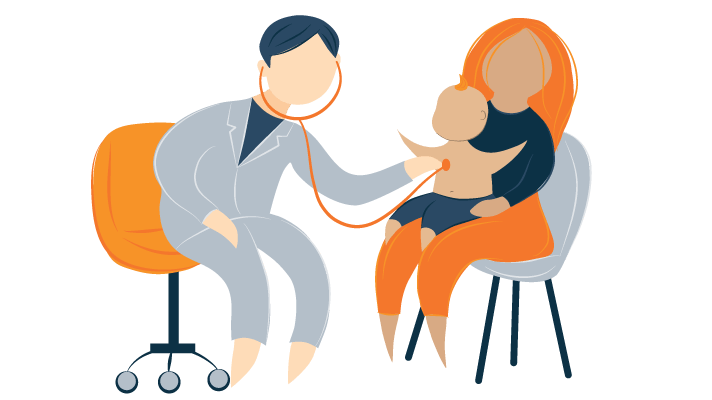 Is my baby’s drooling excessive?

Though messy, increased saliva is a normal part of infancy and one of the first signs of teething. Prolonged moisture on the skin can increase irritation and result in rashes, so it is important to protect delicate skin by using a barrier lotion or cream and keeping things dry. If you have concerns about rashes or skin irritation from drooling, speak to your Pediatrician.

What temperature is normal?

According to the AAP, temperatures of 100.4°F (38°C) or above are not associated with teething and may be a sign of an illness or infection. If you are concerned about your child’s temperature or if they have other symptoms, speak to your child’s doctor to find out if they have a medical condition requiring treatment.

What remedies are safe?

Certain OTC medications and natural remedies may not be safe for children. Oral gels and numbing agents containing belladonna, benzocaine, and lidocaine have been found to be unsafe and should not be used. If you have questions or concerns about what remedies are safe, be sure to consult with your Pediatrician.

How do I care for my baby’s teeth?

Even before the first tooth appears, it is good to get into the practice of rubbing a piece of gauze or a damp cloth over the gums. This will also help your little one get used to the sensation and protect against harmful bacteria. Once your baby has teeth, you can begin by using an infant toothbrush with a grain-size amount of toothpaste, increasing to a pea-size amount by the age of 3.

When should my child first see a dentist?

The American Dental Association recommends scheduling a well-baby visit with the dentist as soon as your baby gets their first tooth (or by their first birthday). During this initial visit, the dentist will check for any signs of tooth decay and discuss the proper way to brush your child’s teeth to care for their brand new smile.

Teething can be a painful experience for everyone involved – crankiness, anger, lack of sleep… and then there are your baby’s symptoms! As a parent, it can be hard to see your precious little one in pain and not be able to make it go away. Unfortunately, teething is a process every child must go through, as challenging as it may be.

While you can’t fully eradicate their pain, there are some ways you can help to minimize their discomfort. Follow our top ten tips and tricks if your little one is showing signs of teething and be sure to consult your Pediatrician for any concerns. Teething may be one of the more challenging stages, but like every other season in life – this too shall pass. 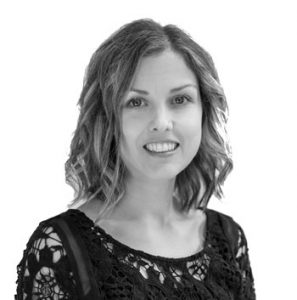 Raina recently stumbled into a career of writing after working as a nurse and health coach. She feels right at home promoting the many benefits of sleep. In her spare time, she can be found playing at the beach with her 3 kids, reading, or perusing a local natural food store.